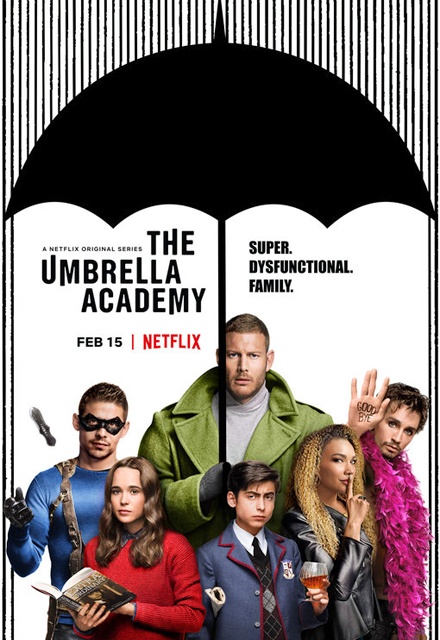 Avg Rating (0)
Your Rating
Fridays, 3:00 AM EST on Netflix
Tracked 7,040 Times
Current
2 Seasons, 20 Episodes
60 Minutes
Buy or StreamAmazonAmazon UK
Action Drama Netflix Superheroes
A dysfunctional family of superheroes comes together to solve the mystery of their father's death, the threat of the apocalypse and more.
Share on:

I liked it from the start, its very 'left of center' weird... The Addams Family meets The Royal Tenenbaums meets Pulp Fiction.

Although some of the people have superpowers, two of the bunch really don't... one is just a weird guy that thinks he is Batman with knives, and the other apparantly didn't have anything special about him until he was injected with Chimp serum. They never explain the origin of the powers, or explore the many many more people in the world that were supposedly born on the same day who also have powers.

The show holds up fairly well over the course of season 1, I knocked it down to 3.5 stars due to lots of boring dialog and for being somewhat predictable. It was obvious that the Vanya character had powers and they were being repressed by the pills. Its an old trick from mystery novels, you ignore a character and in the end we find out they were the one who did it.

I'll watch season 2 and I suspect there will be a season 3 as well since there is a third graphic novel coming out soon. It does have a lot of gratuitous vilolence, and is no doubt teaching the youth to solve problems by killing people. People are constantly killed with no regard whatsoever.

I dislike Ellen Page taking a job from a hetero-sexual actress. You can't complain about straight people playing homosexuals and then allow a homosexual to play a straight person. What if it was a white person playing a black person? Just watch the news to see how well that works out. I know its gone the other way for a very long time with heteros playing homos on screen, but that doesn't make it right to go the other way. It isn't helping the homosexual cause to pretend to be straight for a tv role. And Ellen being so vocal about her sexual orentation and bias in hollywood kind of ruins the show a little when she doesn't play a homosexual. I don't want to know I'm watching Ellen Page, I want to be watching the character, but her real life persona is larger than her acting ability. She has never been more than a B level actor. I do like seeing her act, but that barely makes up for what I call The 'Look At Me, Look At Me' Effect.

Amazing ending! Although to much back story to sift through can be gut wrenching. If I have to be honest the only reason I finished this one was because IMDB gave it such high regard. Netflix needs to quit stretching out episodes. For example Lost in Space. Great material tarnished by 4 extra unnecessary episodes.

I really enjoyed this show. Can't wait to see what season 2 has in store. One complaint, not really fond of Ellen Page's portrayal of her character. Anytime she was on screen, I began losing interest.

How does that mumblecore actress keep getting so much work?
It's unfortunate that the remaining cast was not strong enough to make this show more enjoyable and watchable. This is one of those shows that have a decent trailer to draw you in, a great plot on paper, and good production quality that make you want to stick with it to see if it gets better. Unfortunately, for me, it didn't get better. Cool new show. I really hope season 2 will show the powers of the other babies as well.

I got bored after a few episodes as the story did seem to drag a bit, but ended really good, can't wait for season 2

THE UMBRELLA ACADEMY - SEASON ONE

It has flaws and excesses, but the series, whose first season is available on Friday, nonetheless lands in the sweet spot between comedy and drama, and between a plot-and-action-driven narrative and character exploration. By the time Mary J. Blige and Cameron Britton show up as time-traveling assassins named Cha-Cha and Hazel, respectively, I was fully onboard, at least for this one season.

Fantastic show! A brand new and fresh spin on original content. I'm looking forward to see where they take us over the next coming of seasons.

I really enjoyed this show. It has alot of potential for many story lines. I hope the ending means there is a season 2.

So far there isn't as much action as I was hoping for. A drama, slow super hero kind of show. Normally I would have stopped watching this but the weirdness (and weird it is) of the show is what has kept my interest. Wait and see what happens next season. Another amazing Netflix show. Loved the characters, the story, and especially the soundtrack and how they incorporated the songs into scenes. It's quirky, strange but lovable.

There it is! The show this decade has been waiting for! This was so good I binged watched it with delight.
It's weird, fun, has an amazing soundtrack, great actors and characters you can easily relate to. What's not to love?
Still reading this review? Come on now, watch this show! I watched it all in one day, I wish there was more to see! Absolutely in love with this one. It's great to see how each character is so different.

Great show with a great soundtrack.

Klaus is my favorite. :)

This is an odd, weird, off beat show and if you can roll with that its pretty damn entertaining. fuck this slays so damn good I really liked the first season but I think they could do so much better.