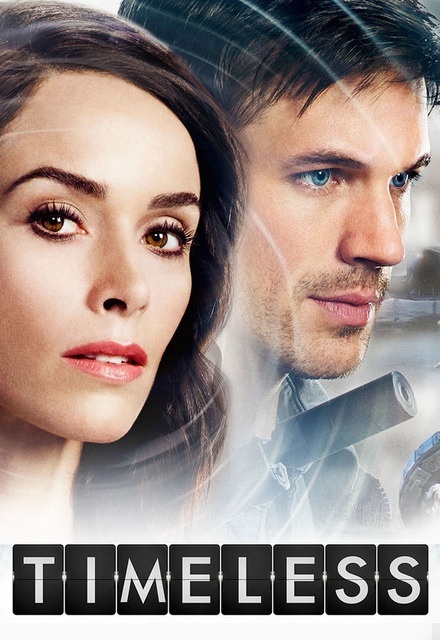 Avg Rating (0)
Your Rating
Thursdays, 8:00 PM EST on NBC
Tracked 12,073 Times
Concluded
3 Seasons, 27 Episodes
60 Minutes
Buy or StreamAmazonAmazon UK
Action Alternate History NBC Science Fiction
From Eric Kripke, Shawn Ryan and the producers of “The Blacklist” comes this thrilling action-adventure series in which a mysterious criminal steals a secret state-of-the-art time machine, intent on destroying America as we know it by changing the past. Our only hope is an unexpected team: a scientist, soldier and history professor who must use the machine’s prototype to travel back in time to critical events. While they must make every effort not to affect the past themselves, they must also stay one step ahead of this dangerous fugitive. Can this handpicked team uncover the mystery behind it all and end his destruction before it’s too late?
Share on:

Having escaped the chop and returned, please don’t tell me you are seriously thinking about dropping this show..........just when we see the Borg Queen actually has a heart.
What’s it done wrong to merit axing

Great start to Season 2. More in-depth with the backstory that makes me want to keep watching week after week.

Yay for surprise renewal! I love this show, it's so fun. I’m very happy to learn NBC renewed this series. I also believe some NBC executives remember what happened when Star Trek was canceled despite loyal science fiction fans.
I am lookingforward to learning if Lucy is ever able to restore her sister or if Logan rescues his wife or if our time travelers are able stop the Rittenhouse group? The series has a unique take on time travel. The writers can use that plot device to reboot the entire direction of the show if they believe they need too. Good Luck.

Hmmmm? So was cancelled, so now un-cancelled. Renewed!! Nice to see! Note to self. re-add to tracking list!

If its true and they did renew this show ... Good for them I really enjoyed it..... I love this show . I love history and I love when they go back in history to fix what the others undid in history. I hopw it keeps going to another season.

I love this show so much!!!
I'm glad they haven't cancelled it.........yet.
Cause, you know all the good shows gets cancelled.

I have really gotten into this show and the characters. I hope it comes back for a second season.

What can I say? I love all Bio-Location and Time Travel concepts. This one's interesting in concept and casting. Especially the "saving historical integrity" vs kill the New World Order bad guys. Is it me, or does this show have a high number of reviews compared to other relatively new series? I may be wrong. The appearance of so many reviews here (and some really good ones) made me curious, makes me want to try this show again. Point: Keep writing! Write more! It's good for you, good for us, and good for (some of) these programs. :)

(Initially, I thought the premise of this show was so hum-drum and the pilot did little to keep me watching. An insightful review here changed my mind about dropping this series off my tracker. Thanks everyone for contributing your voices!)

Imagine Back to the Future but in a dramatic format. Not just fixing the timeline of a select few but the entire world. Biff was a bully, the bad guys in Timeless won't make you laugh they will make you hug your pillow as you bite your fingernails because they are bone-chillingly evil. You won't just visit the 80s, 50s and the old west; you'll visit a different time period in each episode and perhaps learn some history in the process and discover that even the smallest of changes can alter a vast amount of outcomes. And while you're watching stop and write down some of the names and occurrences that you hear on each episode and Google them; learning while you're being entertained makes it all the more exciting.

Sliders meets the original 12 Monkeys movie. Traveling in time to fix problems, and chasing your nemesis, but.... of course... failing to stop them from causing more issues. Darn, another season. I'm only giving it 3 stars as the "I'm a black man in 1960/1865/1760" and the "I'm a woman in a man's world" gets old... even if it is highly historically accurate. The question I have been asking myself from the second episode... why don't they build another good time machine instead of the crapping proof of concept one? Oh yeah, lack of writing skills.

Timeless, more Timewaste. I get it, it's Scifi, but not the good kind. When an American studio takes on something like this, you can expect better than average CGI. Acting and writing not some much. You get that here. And then there are the clichés, American viewers need: all Germans (living or dead) are Nazis, and therefore war criminals. yes, the Blitz was a war crime, over 40k civilians died in just a litte over 8 months, but so was Dresden with somewhere between 50k to 200k in 3 days, or even worse, the two nukes on Hiroshima and Nagasaki with almost 300k with two bombs- but well, the victor writes the history books (*spoiler*"great" moment with Wernher von Braun: he was a Nazi through and through, and father of the V-program, but don't kill him, he is of use for us, so morality is not important - LOL), and so it is in this show, too. It is for "patriotic" Americans, others with education and a more diversed view of the world should stick with the new season of Humans - British-Swedish-American show, well thought out and deep.

Not sure about this yet, but find something interesting about it so will continue watching for now