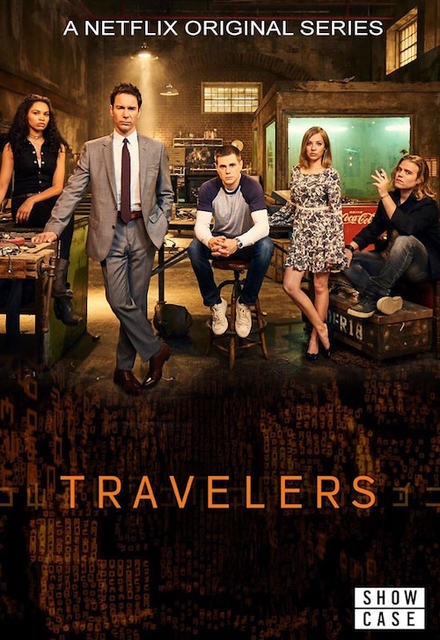 Travelers is a Canadian-American time-traveling TV series, and as of today there have only been two episodes. I stumbled on this unpretentious series quite by accident, at the time only the Pilot had been released. I gave it 5 minutes to hook me, and I ended up watching it all the way through. The premise is the same as the old 80s Jack Deth - Trancer films, send the consciousness back in time by taking over some one else’s body. In Travelers, its people who are destined to die on a certain date, the future Traveller takes over the empty so to speak. Thus far, this show has not been overpowered by lots of wiz bang special effects and CGI, it has mostly relied on some very good acting. This series has a very English feel to it, which I guess comes from its Canadian connections. So far it’s pulling off an understated cool vibe very well. In the second episode they prevented an anti-matter explosion. I guess the ultimate success of this series depends on, coming up with plot lines which are more intricate than a bunch of people running around using their future hindsight. Trying to stop things from exploding and thwarting naughty people. Two reasonably good episodes so far.

Oh man!!! I'm so excited to write yet another glowing review about a fall 2016 show. This year in television has been so great!

Travelers might be one of the best new shows of 2016. Syfy is going to be crying itself to sleep when this airs in the U.S. on Netflix and the ratings are tremendous.

Travelers is an extremely well-written, time-tested, formulaic serial drama about a group of travelers from the future sent back into bodies in the present to save the world from a series of catastrophes that lead to devastation in their time.

We know nothing about each of the travelers, but in the pilot, we are introduced to the lives of their host bodies - the very same lives that they must assume, with only the knowledge that has been given to them from files recorded in the history books. 5 Separate travelers with 5 unique situations in which they must blend in makes every minute of this show, even the ones that don't involve saving the world super suspenseful and exciting. So far in the two episodes I've seen, each and every scene has been fun to watch and serves a purpose, and even the characters only present in a particular episode are written to the same high standard.

The cast is full of recognizable array of actors, all alumni from various shows, including Eric McCormack (Perception). Also worth mentioning is Mackenzie Porter, a legendary super cutie whom I literally cannot look at without going, "Geeeeeeeeb!"
Between the script and the music, the other aspects of the show feel well put-together.
Travelers feels right at home with my Science Fiction craving, evoking a similar emotional response to shows like Continuum and The 4400. But at the same time, its extremely fresh.

More and more shows are taking a setup like this, following a group of characters with equal weight rather than a solitary protagonist. We first saw it in 2004 with The 4400, then 2005 with Lost, and it started to become a popular format in 2008 with Heroes. Though more recently with shows like; Heroes Reborn, Sense 8 and Falling Water. It seems to be a format that people like as it adds many layers of character development to the series, without necessarily sacrificing main plot, as was the case with Lost.

I'd even go so far as to say that Travelers may be the culmination of this format nearing its perfection. I just hope that it continues to be as enjoyable as these first two episodes have been. And I can't wait to see Mackenzie Porter next week :D

ALL REVIEWS FOR TRAVELERS »