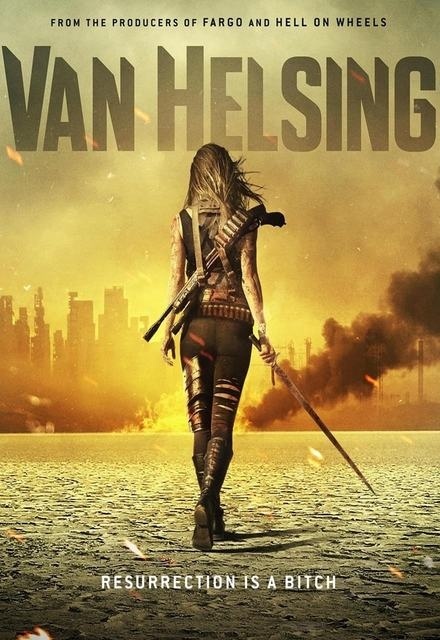 Avg Rating (0)
Your Rating
Fridays, 10:00 PM EST on Syfy
Tracked 6,977 Times
Hiatus
4 Seasons, 52 Episodes
60 Minutes
Buy or StreamAmazonAmazon UK
Action Fantasy Science Fiction Syfy Vampires
Vanessa Helsing, distant relative of famous vampire hunter Abraham Van Helsing, is resurrected only to discover that vampires have taken over the world. She is humanity's last hope to lead an offensive to take back what has been lost.
Share on: The show kinda boils down to a Walking Dead knockoff with vampires playing both villainous parts. The feral vampires are about as intelligent as walkers and about as lethal--meaning that they usually just serve as fodder unless there are loads of them. The more intelligent vampires have factions, intrigue, espionage, and way too much animalistic behavior. Seriously, it's distracting how often they grunt, snort, and open and close their mouths while having normal discussions in comically gutteral voices.

The human side is what keeps this show going. Well, some of them. Some characters are witty and deep while others are illogical or completely irrelevant. When I keep forgetting about characters in a group of less than 10 people, there's something wrong.

I'm not in love with this show. In fact, I'd say it's more bad than good, but it's just good enough for me to finish the first season. I highly doubt I'll pay much attention when Season 2 releases, though. Also, I believe the summary of this show, which I've read elsewhere, kinda spoils something. I'm on Episode 11, and there's been zero mention thus far of her being "resurrected". She had a life before everything went vampire. In fact, she was married before "The Rising" and even has a child. Finding her child is her motivation. Speaking of motivation, the group seems to be very easily sidetracked away from important goals. Serial killer among the group? Let's all get drunk and sing songs together! Still missing that daughter? You should probably try to solve everyone else's problems before really looking for her at all.

I take it back, this show is pretty stupid. I just talked myself down to a 2-Star review.

first season and only 13 episodes... much too little... we need more episodes! the acting is terrific, the makeup for the most part really good, the costumes and sets really good and the writing great... I never read the graphic novels so I don't know the story but based on this series I want to... I power watched the whole 13 episodes as I couldn't help myself and now I'm just seriously mad because I have to wait for the next season which I hope gives us more episodes... each episode moved fast and fluidly to give us fairly well rounded story, enough to care about the characters and be sad or angry regarding their actions or circumstances... I'm not sure I've heard of any of these actors before but they are fresh and very believable in their roles... this series is definitely different from the rest and a total MUST watch.

My Thoughts on Episode One: Vampires have to be my favourite mystical creatures. I love anything vampire. Buffy, Blade, even Twilight on the rare occasion but don't know how I feel about these vampires. It reminds me of The Walking Dead or better yet, Fear of the Walking Dead. So far the vampires are nothing more than zombies with awful teeth and I don't like it. That being said I don't think it is fair to judge a show based on its first episode.

My Thoughts on Episode Two: Yup, spoke too soon on the vampire front.

So...is it vampires? Or zombies? Am I watching this show Van Helsing or a discount Walking Dead? Whatever it was, I think it failed and it's a pity because they have good source material to work with...

Needs some work. Found myself tuning out during almost every episode.

Unfollowing the show after 11 episodes... The show promised to be good, but the story has nothing to do with the main character plus is boring as hell! big FLOP!

So let me get this straight... We get a woman who's pretty much invincible, a soldier which cannot think out of the "I got a mission assigned since three years, everyone's dead but I keep on my mission", and meaningless protagonists, all of that in a closed space, while the world is governed by russian/slavic vampires which need humans but do not do anything about trying to preserve them a bit (because food source is overrated). A new group of people? let's kill each other and not think rationally one bit, let's get angry for no reason, don't investigate shit when you have to. Different breeds of vampires? how? why? why do they look like zombies and do cat sounds? Two vampires do not make it out of sewers but two girls with a torchlight do. Where's the link to the Van Helsing family?
I had high hopes for this TV show... I mean, Van Helsing is a well known name, the girl looked pretty kick-ass.
6 episodes crushed my hope like a butterfly on an hydraulic press. i had very high hopes for this show....but so far its just been, whats the word....Sucky!! Episode 4 and this show is sooooooo slow....... I don't watch TWD, but i love vampire shows. I will continue to watch and give it a fair shot, but can we please get some action.

Ok I am now on Episode 6 and it's gotten worse. The story line is just dragging on. It is so sloooooow and make so sense. I had such high hopes.

Quit watching. Just couldn't get into it.

Nope~ The zombie/vampires make no sense. There is a huge loophole in the level of their intelligence and ability to communicate. I was really looking forward to this one. Concept was good script sux.

I'm officially done with Van Helsing. Really. I tried. Maybe I was expecting too much from this show. This show is cool! I like how she doesn't know what she is. I also like the fact that she can turn these crazy vamps back into humans!! This show is pretty interesting so far.

After 4 episodes, I can definitely say it's not for me so I quit. IMHO : A waste of time ok show. not the best not the worst.

HIgh hopes left me with disappointment after watching the first two episodes.

OMG!!! Vampires that aren´t sexy...no romance, nudity, love...what has happened?
It´s like a poor mans Walking Dead with teeth show.
So far I hate it.

Was hoping for so much more. Such a shame, as I love a good vampire hunt! To me, Van Helsing was a mix of Z Nation and The Strain, nothing original, with a confused storyline that wasn't gripping, characters that I didn't feel for, and vampires that looked liked zombies. Won't be sticking around for this.