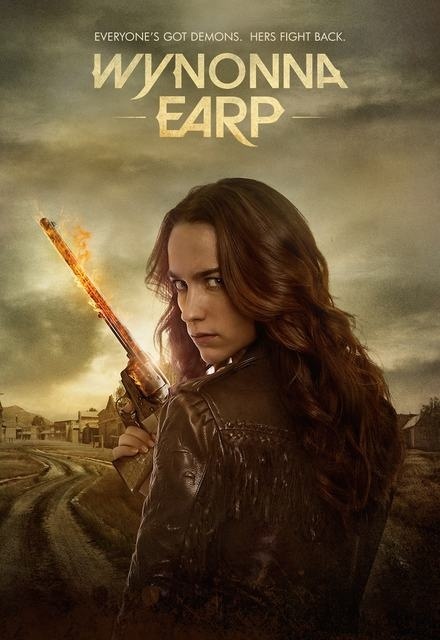 Wynonna Earp is an interesting take on superhero tale using historical and supernatural elements to bring this story to life. This modern day Western packed with action which is done differently but well and there's a comical aspect to the show. I"m eager to see in what direction this show is heading.

Wynonna Earp 2016, debut TV airing was captivating. I truly enjoyed the western aspect that was seamlessly married to our modern era. The touch of old with the new is refreshing. Obviously, it helps that were talking about The Earp legacy in regards to old school westerns and such.

Equally welcome, is the female lead Melanie Scrofano who plays none other than Wynonna Earp. It’s refreshing to see a strong female lead that display’s intelligence and the ability to hold the audience captive. This reviewer thinks the casting of the lead part is spot on, kudos to the SyFy Network.

The demon constant in Wynonna Earp has many directions it can take. There is room to grow and develop an insane following in the process. This alone is a huge plus. The fact that the fork in the road leads to many paths, which can be explored is going to make this series very popular.

Intelligent, witty, nostalgic, Wynonna Earp has a little of it all. Did I mention that awesome ‘Western’ feel? I think this SyFy program will be around for quite some time. I would have given it a 5 star rating, however that's a bit difficult after one solitary viewing thus I settled on 4 out of 5. Check out a viewing Fridays, at 9:00 PM CST.

I have never read the Comic Wynonna Earp is based on, so I had absolutely no idea what to expect going in, other than that it stars one of my favorite actresses, Melanie Scrofano (The Listener, Damien, Robo Cop).

Wynona Earp mixes two genres. Western, and Demons. I don't like Westersn, but I love Demons, but that's just a personal preference. It gave me similar vibes to shows like Sleepy Hollow, Z Nation, Supernatural, Lost Girl and Dominion. Almost all of those are Syfy shows, so its definitely on the right channel. And knowing Syfy, it will most likely be renewed for at least 1 more season, almost regardless of it's ratings. Syfy shows tend to get a lot of L7 and VOD ratings.

The Show follows Wynonna Earp, returning to her home town of Purgatory to attend a Funeral. She is the next in line to inherit the Earp Curse, which is passed down on the 27th birthday (for some reason). The curse makes it so that all people killed by previous Earps, return from the dead as demons to come after the inflicted. Using the special pistol "Peacebringer" the curse-bearers can once again deliver the demons back to hell. This is a decent premise and since it takes place in a Western setting, it sort of reminded me of that movie with Nicolas Cage, Drive Angry. Its very campy, but it knows it and embraces it. This will most likely be a serialized show, and personally, I believe its success will depend on how epic it is. If stupid country bumkin rednecks keep returning from the dead only to be shot again, I don't think it will be very entertaining. But if there is some big intelligent villain who return who does some behind-the-scenes masterminding with the intentions to take over the world... I think it could be a lot of fun.

3 and a half stars. A fun, promising show. I'd give it more, but I really don't like Western settings XD.

I really liked season 1, but everything after has been slowly losing its draw. I'd be ok with this show being cancelled, honestly. Just really hasn't lived up to its premiere season.

I enjoy a good Western movie and I like the stories about Wyatt Earp and Doc Holiday. This puts a different spin on it and it goes well with the whole zombie apocalypse thing that has been going on on TV.
It is not rocket science or brain surgery but a good show with decent characters and it is fun to watch. I really like the character of Doc Holiday and I want to find out more about his story.
After watching almost the entire second season I have to say that it lost a lot of its momentum. It degenerated into a trashy slasher horror. I didn't finish this season and I am breaking up with the show. Really disappointed.

A FEMALE HEROINE RELATED TO WYATT EARP, though reluctant and feisty as a horse with a broken shoe-- And ZOMBIES? What more could you ask for? I just like her! The mod-west concept is fun. Characters have depth and heart. And the theme song sticks in my head. lol!

The show doesn't suck, but it doesn't move. It's just keeps plodding along. I had to give it up 3/4 through season 1. I'm surprised it got picked up for season 2.

Different but strangely have to keep watching. A little far fetching but aren't most shows worth watching.

Love waverly and nicole haught! Exciting serie.
waiting for the next season

This show started off strong but now has fallen behind, it's going way too slow, the comedy in it just falls flat, the way the characters a made to feel like.. makes you think NO ONE is that dull and stupid. I originally gave this show 4 stars but since its downfall from around episode 5 onwards iv'e reduced it now to 2 stars, it's a shame.. i'm a fan of the comics and this show DO NOT do them justice. The story and lore behind the show is great BUT the writing of this series is too simple and easy to predict what's happening and what's going to happen. Around 90% of the stuff that I have said is going to happen HAS happened, I HATE shows like that. I was REALLY hoping they would have made this show kinda like Supernatural, where she's out hunting all over the USA BUT nope, instead they leave it in a dump of a run down town where even the police force combined must have like 5 braincells between them.

Exceptionally boring, poor acting, uninspired storyline. Not really sure how they are going to make a whole series out of this.

Oh No Mr.Bill , SyFy has put out another Spooky Fy ,Horror-ible Show ! Related to Wyatt Earp too !

Great show. Glad we are getting a season 4 so it isn't ending on cliffhanger (at least not yet)

I have always enjoyed this show since it is very unusual. Good will always come out on top!

Action/drama/fantasy show. Supernatural show with a badass woman that fights demons with a western hint. This show has a nice storyline, but their budget wasnt superbig, they still did good imo :) It is also funny and witty :)

Boring, bad acting, only watched 4 shows and that was to many. Started to watch again after a couple months, just as bad as it was before. Didn't make it through the 5th episode.

It gets better and better as it goes on, at first not impressed.