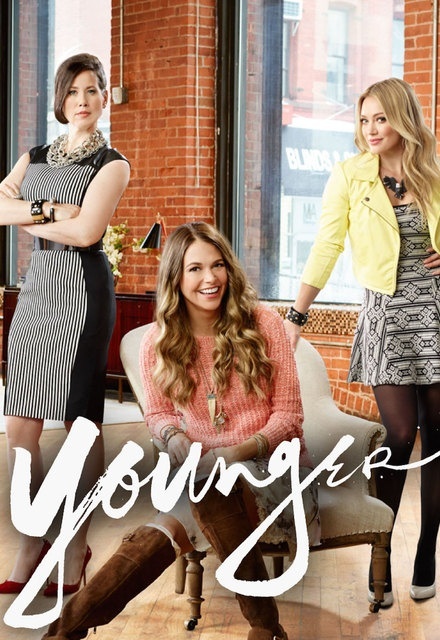 Avg Rating (0)
Your Rating
Sundays, 10:00 PM EST on TV Land
Tracked 18,605 Times
Hiatus
6 Seasons, 72 Episodes
30 Minutes
Buy or StreamAmazonAmazon UK
Comedy Sitcom TV Land
Based on the novel by Pamela Redmond Satran, Younger follows 40-year old Liza (Foster), a suddenly single mother who tries to get back into the working world, only to find it’s nearly impossible to start at the bottom at her age. When a chance encounter with a young guy at a bar convinces her she looks younger than she is, Liza tries to pass herself off as 26 – with the help of a makeover, courtesy of her best friend Maggie (Mazar). Armed with new confidence, she lands a job as an assistant to the temperamental Diana (Shor) and teams up with her new co-worker and 20-something Kelsey (Duff) to make it in the career of her dreams. Now she just has to make sure no one finds out the secret only she and Maggie share.
Share on:

I was skeptical about this show considering the standard of comedies these days, but after watching the pilot I was pleasantly surprised! It's a funny, lighthearted series which accurately portrays the generation gap in an amusing, yet realistic way. Would definitely recommend!

Younger is a fun raunchy comedy following older woman Liza, pretending to be a twenty something literary agent. The show is fast paced, funny, and has Hilary Duff. Could you really ask for more?

Just keeps getting better and better. Liza's wry humor and insights make me happy I am not having to go through the challenges of being young in the modern world, yet a little happy that women are actually taking charge of their own lives...despite society's efforts to add guilt and shame.

I adored her in BUNS, and so happy she is back in YOUNGER. This single mom's college aged daughter in India is unaware her recently ditched mom is acting 26 instead of 40 something. The 20 something women in the publishing world are accepting her while her boss is being edged out for being too old (or too mean...hard to tell)

I approached this show with very low expectations — maybe I was just being judgy about it airing on TV Land — but found that it's impossible to not enjoy it. I'm pretty sure Sutton Foster makes a more convincing 20-something than I do.

Surprisingly funny and bold. I watched on a whim after reading the brief description & without knowing its genre. I literally laughed out loud more than once at this show and already added it to my tracker!

A 40s divorcé re-enters single life and the job market by re-inventing herself as a 20-something hipster. Ignore the teeny-bopper name it was given, this series is smart, funny, relatable and brilliantly cast. Sutton Foster is a star and her genuine sarcastic whit is so refreshing.

I didn't expect to be that funny and it is.I really like it,the characters are cool,the story is good and new.I was really laughing on some parts and I can't say that for couple of new comedy shows that I wanted to give it a try,but left disappointment.

Age is just a number in the new TV Land series, Younger. The show, which is created by Darren Star (Sex & the City), revolves around Liza (Sutton Foster – Bunheads & Thoroughly Modern Millie), who is a 40-year-old recent divorcee and mother. She once worked at Random House Publishing for three years where she became editor and then left her job to raise her daughter.

Now, fourteen years later, her daughter goes on a mission trip to Mumbai and Liza is left alone and needs a job to support her and her daughter. But the publishing world has changed during her hiatus and she’s finding she can’t even get into the glass room to hit the glass ceiling because of her age.

To soothe her bruised ego, she and her best lesbian friend, Maggie (Debi Mazar – Entourage), go out to drink the pain away. While they’re out, Liz is hit on by a 26-year-old, Josh (Nico Tortorella – The Following), who believes her to be that same age. Empowered by this ego boost and with the understanding of “people believe what you tell them,” Liz goes to another interview pretending to be 26 and eventually gets the job.

From there, Liz has to keep up with the fast-paced environment of publishing, the advances made in marketing with technology, and the unfiltered office chatter with her new friend, Kelsey, played by Hilary Duff (Lizzie McGuire).


The only downside I see to this show is that it is on the TV Land network. I picture the target audience of this show to be more ABC Family than TV Land. The idea behind the rebranding of the TV Land network is due to the conclusion of their hit series Hot In Cleveland, which starred Betty White, Wendie Malick, Valerie Bertinelli, and Jane Leeves.

Hot In Cleveland drew in a wide-range audience for the network with sharp humor and established stars. In need of a fresh new comedy, TV Land picked up Younger in the hopes of holding onto that wide-ranged audience. The redeeming factor of this show is that, through success, failure, and life that happens in between, Younger is a story that will be relatable to viewers of all ages.

With a fantastic array of actors, Younger proves to be highly enjoyable – regardless of your age.

Okay, I saw the ad for this ages ago and thought it sounded stupid.
Now here I am binging it, cannot get enough--LOVE IT! Such a discovery! It's an awesome show! Just love it! It's fun to see the parallel between Millennial and older generations!

There is no way a rational human being would buy into the lead chick being 26 she doesn't look day under 39 years 11 months 2 weeks. Nice body though for a lady of advanced years I'd throw her one. The show is entertaining but its definitely made for old ladies wishing they were still young. The best episode was the one where they took a giant steaming dump on the cruddy awfulness of Game of Yawns and its fatty McFatterson "writer".

I didn't have much hope for this show given how many "comedy's" I've tried watching and discarded, but this was surprisingly good.

The premise of this tv series doesn't sound too good, but truly: it's a lot of fun! Some cool characters, interesting plot lines and, not unimportantly in this kind of series, eye candy!

This show is quite funny. It's not the best but it's definitley worth watching. I like the main character and her best friend a lot and even Hillary Duff is not that bad in this one. Of course it's a bit unbelievable that the whole pretending to be much younger act would work in real life but the overall plot is pretty good and I find their takes on today's youth culture really witty.

i give this show B
not realistic

The perfect mix of Gilmore Girls and Bunheads.

I wasn't really sure about this show but I was pleasantly surprised. I am looking forward to Season 2.

I only watched one episode so far, but it seems hilarious! Updated review to come after I watch more!

I don't know. I'm still unsure about this show. It's not bad but it's not that good either. It's one of those shows that makes you wonder why it get a second season and some others don't... But I look forward to see how the whole truth it's going to be revealed, and if she keeps working on editorial. With some of the lack luster comedies this year I was a little bit skeptical about Younger, I'd seen a couple previews but decided to wait a few weeks then play catch up. After binge watching the first 6 episodes I actually screamed at my computer because I had to wait a week until the next one aired!!

The characters are really well written and the comedy is on point. There is a definite Sex and the City feel to it (both Darren Star works) but without so much of Carries self deprecation. Glad that this has been picked up for Series 2 as it keeps getting better.