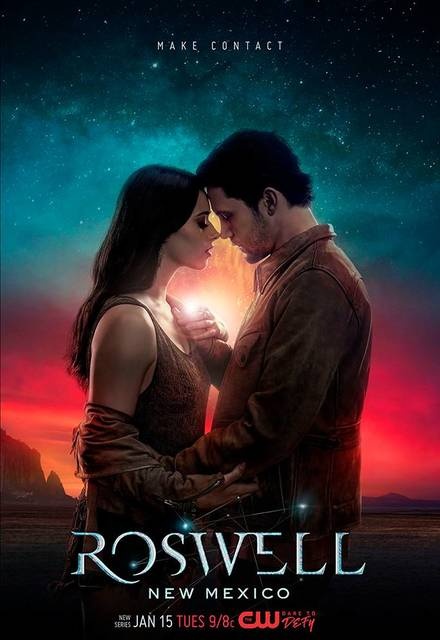 Avg Rating (3.85)
Your Rating
Mondays ,9:00 PM EST on The CW
Tracked 3,550 Times
Hiatus
2 Seasons, 26 Episodes
60 Minutes
Buy or StreamAmazonAmazon UK
Aliens Drama Fantasy Science Fiction Supernatural The CW
After reluctantly returning to her tourist-trap hometown of Roswell, New Mexico, the daughter of undocumented immigrants discovers a shocking truth about her teenage crush who is now a police officer: he’s an alien who has kept his unearthly abilities hidden his entire life. She protects his secret as the two reconnect and begin to investigate his origins, but when a violent attack and long-standing government cover-up point to a greater alien presence on Earth, the politics of fear and hatred threaten to expose him and destroy their deepening romance.
Share on:

My ideal of a remake means NOT hiring a new cast to act out the same scenes in the original. Did they just change a few words from the original script? I went into this wanting to like it because I enjoyed the original. The original wasn't "must see TV" but it was decent TV for its time, so I actually expected and hoped this might be better...you know,bigger budget, better script. But nope.

To make matters worse, this show is blatantly pandering with "token" characters. Yes, being a token is offensive, so why is this show filled with what seems like a South Park parody of Token Black, the only black male child on South Park? And yes, I am a visible minority and I prefer my shows to look like the world, but not in a demeaning, pandering, formulaic, token way. Latina, check! Gay male, check! Racism, check! Oops, they forgot a disabled person, a black person, an Asian person and Indian person and a Native American/Indigenous person.

What in God's name were the show runners thinking? I'm a woman of colour and fairly liberal in my politics. But I don't want to be pandered to. I want TV to be inclusive and reflect people of all shades of every ethnicity and sexuality. That should be easy enough to do while making it seem natural. I can list tons of shows that do that well, for example, Greys Anatomy, Scandal, True Blood, New Girl, Brooklyn Nine Nine. These shows don't make their diverse and LGBTQ characters seem like "tokens" which is offensive because nobody wants to be a token hire. There's something to be said about subtlety and making things seem as natural as it does when you step outside of your front door and see the diversity in the world. Shit, even racist Rosanne came back last year with two black characters and a transgender character and made it seem more natural than this.

The show runners need to do better. Give us the world we live in without it seeming like you ran down a diversity checklist. And while some viewers like me watch sci-fi to be teleported/escape the craziness in the news, if you plan to bring in elements from the crazy world, please don't make it central to the entire series rather than the odd episode.

I'll watch episode 2 for a giggle to see how long I can make it through the episode. I'm taking bets on how long until this gets cancelled. I bet it gets cancelled in the first season before the episodes that have been made get to air.

ALL REVIEWS FOR ROSWELL, NEW MEXICO »