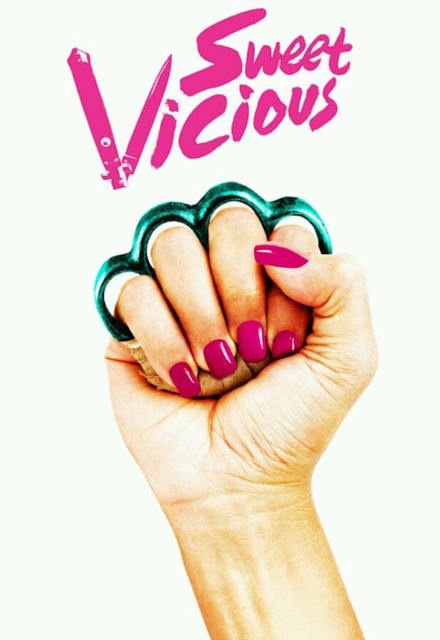 Avg Rating (0)
Your Rating
Tuesdays, 10:00 PM EST on MTV
Tracked 996 Times
Concluded
1 Seasons, 10 Episodes
60 Minutes
Buy or StreamAmazonAmazon UK
Drama MTV Teen Teen Drama
Starring Taylor Dearden (“Ophelia”) and Eliza Bennett (“Jules”), “Sweet/Vicious” is an offbeat superhero story for the millennial generation. Hell-bent on bringing justice to those who get away with abuse on their college campus, Jules and Ophelia take on double lives as wannabe vigilantes. Filled with clumsy attempts and missteps, the odd-couple pair of antiheroes must balance their new secret life with best, friends, parents, love interests, and the metaphorical monsters under their beds. At the core of the f*cked up, hilarious, heartbreaking world of Jules and Ophelia is the heart of the show: two girls, who never felt like they belonged, finding a home in each other...and trying to kick a lot of ass.
Share on: This show is sooo great. I didn't see it coming, but once I started I couldn't stop watching. Sweet/Vicious deals with rape and the consequences of rape culture really well, and while the subject matter is dark and uncomfortable, the show never belittles or take the easy way out. Yet, it still manages to be fun to watch and tell an important story. It is nuanced and empowering and I want all teenagers to watch it so they can understand the world they live in better.

Sweet/Vicious takes MTV's scripted fare to the next level, finding a nuanced tone that's perfect for telling such a layered story. The series begins with sunny sorority girl Jules (Eliza Bennett) and weed-dealing hacker Ophelia (Taylor Dearden) teaming up to battle the on-campus sexual assault that is largely ignored by the administration. Both have their reasons for committing so fully to the cause. There are surprising comedic moments, mostly from Dearden (Bryan Cranston's daughter), and superhero-style action sequences, but the show really excels as an exploration of sexual assault and the culture it breeds. Watching terrible men (and a few women) get their asses kicked makes this sweetly cathartic TV.